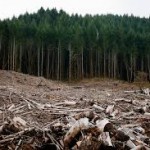 Whether you subscribe to Chemtrail Conspiracy or not, no one can deny the absolute veracity in the private logging industry’s chemical stains on our countryside. The largest offender, quite possibly, is Weyerhaeuser (a foreign – not from Oregon – corporation).

The industry cites regulations requiring the replanting of douglas fir following a company’s clearcutting as the primary reason for the widespread application of herbicides such as 2,4-D, Velossa, and Atrazine. The industry is required to harvest new trees so that after six years they are in a “free to grow” state unencumbered by weeds and brush. The herbicides kill everything but the trees. Their aerial application is simply cheaper than hand weeding.

Meanwhile, folks are getting sick.  Many are testing positive for Atrazine. And yet this practice was banned twenty years ago from public forest lands. The practice survives on private logging lands.

There is certainly an argument to be made for one’s right to exercise control over one’s property, but when that control begins to negatively impact the surrounding community and its common resources such as water, air and animals, the public has always had a right to intervene (i.e. the United States has a long history of “nuisance” law). Protection of the commons is of increasing concern as the effects of resource shortages become more real. And individuals have an increasing responsibility to protect themselves, their health, and their property from the irresponsible actions of adjacent property owners.

The state and federal government are, in part, to blame for adopting policies that, while perhaps well-intentioned, do not address the source of the problem. Instead of overlooking an ecosystem, political parties and leaders attach themselves to a single species and gauge an ecosystem’s health based upon the health of this species. As a result, the state and federal government imposes itself as an arbiter between the species, deciding to eliminate any threats to their “special” species.

With regard to the logging industry’s herbicide application on forestland, the source of the problem, if we follow the trail backwards, leads us to the practice of clear-cutting, which spurned the regulations requiring “free to grow” forest replanting, which, in turn, spurned the industry’s cheap solution.

Responsible stewardship is the answer. For those in the industry looking to improve their bottom line, people have demonstrated that they are willing to pay for products that are made with a greater eye towards responsible stewardship. A “not from clear-cut” brand would certainly raise an opportunity for a would-be purchaser of wood products.

On the government’s side, responsible stewardship arises when the effects of regulation on private industry are analyzed and changes are made to address the source. Being in a logging state, legislative leaders from Oregon, particularly those paid by the logging industry, would have a difficult time challenging the status quo for logging practices that may be harmful to the general public. Yet this kind of bold inquiry is precisely what we need to make our state more healthy, safe and prosperous.