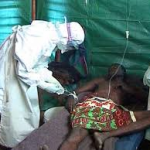 The possibility of facing an epidemic of over a million people infected with the Ebola virus by January 2015 is startling, yet the current crisis has failed to harness the degree of attention the public should be paying to the outbreak.

While the Islamic State has been a formidable competitor for headlines across the world, Ebola poses a far greater immediate threat than IS. Our current political reactions, however, have not reflected this fact.

The beheadings of Richard Foley and Steven Sotloff have captured American attention and were graphic enough to then lead to a bi-partisan resolution to commence ongoing military intervention. Yet the use of force against a group that has demonstrated minimal, if any, violent reach outside of its limited geographic region is cause for questioning, especially when the U.S. just recently wrapped up a decade-long conflict in Iraq and is now attempting to do the same with its conflict in Afghanistan. Meanwhile, plenty of local actors have a vested interest in seeing IS’s demise. U.S. involvement should be focused on more immediate and credible threats to the U.S. population.

Ebola has already killed 3000 people in West Africa and Wednesday marked the first case of the virus diagnosed on U.S. soil. . The virus has an incubation period of 2 to 21 days. That means that someone with the virus may not know he or she has it until he or she has infected multiple others.

West Africa has certainly shown us the regional difficulties of managing a disease of this magnitude. Beliefs the disease does not exist, lack of education and sanitation, and lack of medical resources including lack of health care workers all contribute to the high rate of infection and mortality. As of September 23, 211 health care workers had died from the disease. Perhaps the greatest issue is the number of dead that continues to rise. The bodies are highly contagious and require teams to come in for their extraction. People are dying faster than the bodies can be handled.

So far, the outbreak in West Africa has principally affected Liberia, Sierra Leone, Nigeria and Guinea. However, an unrelated outbreak is now confirmed in the Democratic Republic of the Congo where 42 people have died. A diagnosis here on U.S. soil is a great concern.

Our administration recently announced contributing $780 million to fight the spread of the disease. Yet the U.S. has already spent this amount in its fight against IS. There are reasons to suggest a re-prioritization of priorities is in order.